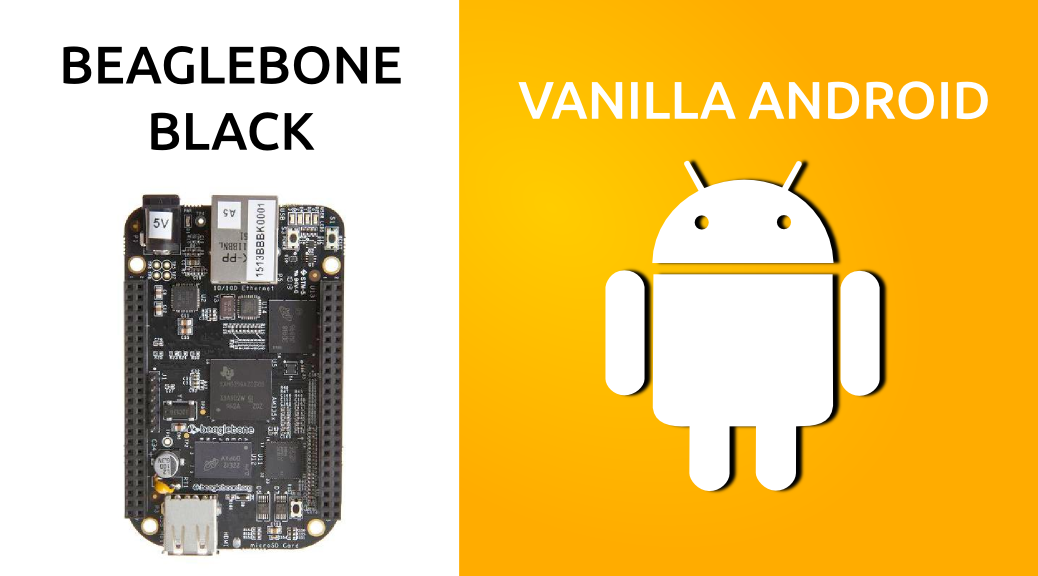 As a result of being vanilla, drivers such as graphics, are not addressed and software graphics acceleration will be used for the example. While the user interface clearly lacks the needed hardware boost of the graphics chip, Texas Instruments have decided to not compile their graphics driver for Android 4.4 Kitkat (and +). Search for the term “SGX” and “AM335” on the TI forums to get an idea of the current state of the driver. Since it is closed source and there have been no notable efforts nor results of reverse engineering it, all the hope of getting hw acceleration sadly remains with the TI team.

However, even if the performance is not optimal, it is possible to configure, compile and build Android for the platform, and very simple applications are still possible to deploy and use.

For this article the following configuration is used:

This article is based on resources of Robert C Nelson, which is doing an excellent job of keeping the Kernel patches for mainline AM335x and iMX6 boards up to date! Find a multitude of tutorials of how to get started with Embedded Linux on the eewiki website.

For deploying a functional Android the following software components are required.

Similar to Embedded Linux development, the three components work together.

U-Boot: The bootloader initializes memory and loads a Kernel image as well as a device tree blog into the RAM. Depending on the configuration those files can be acquired in various ways (tftp, nfs, ext4, fat, from SD, from EMMC …). Once loaded, the Kernel will be started (in our case as uImage binary).

Kernel: For this article we are using the 3.14 Kernel provided by the git repository from Robert C Nelson. Selecting the Android drivers under the “Staging” section, is enough to get Android running. Be aware though that for using Android in a more professional environment, merging with the Android Kernel source is advised.

Android Source: At the point of this writing, the current main branch version of android is Kitkat (working branch 4.4.3.2.1). Instead of focusing on a specific version, this article points out a recipe of getting Android to run on almost any configuration.

Start by following the environment setup steps provided by the Android source code website (here) and make sure to install some additional tools as shown below:

If you happen to have troubles running the ADT Bundle on 14.04 (get errors with adb) then you need to download these additional libraries. (Thanks to http://dandar3.blogspot.ch/2014/03/android-sdk-tools-on-ubuntu-1404-beta.html)

The package “minicom” is used to communicate and interact with u-boot and linux via serial command line on the BBB. Gparted is a very helpful tool for partitioning the SD-Card. The OpenJDK is newly used to compile Android – a big step forward! Installing the proprietary oracle binary is finally no longer necessary.

For building and compiling the components, create a new working directory and give yourself access permission to read/write.

Also while it is possible to use a virtual machine, performance for compiling will be significantly better when opting to go for a native Linux install.

Building on an octa-core processor will take around 40 minutes. Performance is improved by CPU power, amount and speed of memory, speed of hard drive in that order.

Downloading the Android source will take a while depending on the throughput of your network connection. The 15G large source code will be downloaded in a compressed version. The source with the build version will take up around 50GB of disk space.

If you are joining our Embedded Android workshop copy the source code from the hard drive available. If you are doing this from outside the course, then issue the following commands.

Thanks to the patch set of Robert C Nelson, the BBB can be used with a few patches applied on the vanilla kernel. While this might not seem significant, this is an enormous advantage of the platform towards competitors. Having mainline support is in many cases a key factor in selecting hardware components for manufacturers.

Another kernel/kernel directory is now holding the sources of the Linux kernel.

The AM335x processor is using u-boot as its default bootloader. Another key advantage is that it can boot a vanilla variant of u-boot which is (similar to the kernel) patched in order to adjust the boot environment. Again, the patches (and also commands) have been provided by Robert C Nelson and are accessible via github.

This closes the initialization part of the article, now it is time for configuring and building.

Since the downloaded Android source ships with the arm toolchain, we do not require to download an additional one.

The last command will start the compile process of the bootloader.

The output files necessary for deployment are “MLO” and “u-boot.img”.

In order to boot Android properly, place the following uEnv.txt file onto the boot partition of the SD-Card.

Building and Configuring the Kernel

Building and configuring the kernel is an integral part of the process. With the help of “menuconfig” configuration is done comfortably.

Since the needed Android drivers are already selected in the provided config file (configs/beaglebone), it is not necessary to reconfigure the kernel. However, to include other drivers, such as CDC-ACM for instance, you may use configure the kernel with menuconfig as described above.

The resulting uImage and am335x-boneblack.dtb need to be copied into the second partition of the SD-Card (ext4) inside the directory “/boot” as required by the $bootdir and $fdtdir property of uEnv.txt.

At this point, deployment is already possible to an SD-Card. Although no user space has been built, the kernel can already be started and output can be analyzed on the serial command line.

While Android has not been built yet, this is a good moment to check if the kernel boots properly. Therefore, a first deployment step can be very helpful.

In order to deploy Android at a later stage, formating the SD-Card properly is required. Although the setup can be changed according to your needs, this simple layout will help the project to get started. Use the gparted tool installed earlier in order to partition the micro SD-Card as provided by the image above. After partitioning, make sure to set the boot flag for the BOOT partition.

The RFS partition should be at least 200 MB while BOOT can be around 10 MB in size.

Assign the largest bulk of the SD-card to the data partition, and a size of around 100 MB to the cache.

Copy the MLO, uEnv.txt and u-boot.img onto the BOOT partition and copy the uImage and am335x-boneblack.dtb onto the RFS partition under /boot.

Make sure the internal flash of the Beaglebone is cleared (as described here).

The only thing missing at this point is a user space system. For this we need to configure, compile and deploy Android to the root file system of the SD-Card.

On an up to date octa-core CPU this process is taking around 40 minutes. Thanks to a change in the new version of Android, the Oracle java development kit has finally been dropped in favor of openjdk.

While in most configurations Android will be shipped with a ramdisk, it is also possible to place the files onto the external SD Card storage.

For this step it is important that the labels of the SD-Card are according to the section “Micro SD-Card Setup” above. (otherwise just adjust the the variables in export-android-sd.sh)

Two helper scripts will create tarballs from the output directory and extract them with the correct file mods into the SD-Card directory.

Place the export-script altogether with a modified version of mktarball.sh into your /android directory.

Make sure you are executing export-android-sd.sh from within a shell that is set up with “source build/envsetup.sh”. Furthermore, make sure the SD-card is mounted and the second partition is labelled as RFS (or otherwise adjust the variables in the beginning of the script).

While in the last step the Android root file system has been exported, the kernel still needs to be placed in the according location on the SD-Card. For this purpose a new “boot” directory on the RFS partition will be created and two relevant files “uImage” & “am335x-boneblack.dtb” will be copied into it.

Lastly, if not already done so as shown in the previous steps, deploy the generated files for the bootloader and also download our example uEnv.txt in order to boot Android properly.

The uEnv.txt file defines a small set of environment variables in order to boot Android properly with the SD-Card formatted as described above.

It is time to boot Android the first time on the Beaglebone Black. While not having configured any of the build files, it is expected to run into troubles the first time booting. However, at this point properly booting into the bootloader, kernel and user space successively, are very helpful to verify basic functionality of the deployment.

Make always sure to sync and umount before you remove the SD-CARD from your host system!

If you haven’t cleared the internal flash of the Beaglebone Black yet then make sure you follow these steps first before proceeding with this article. This step is very important, since otherwise your Angstrom distribution will boot from the internal flash.

Connect the USB-Serial (UART) Adapter with the Beaglebone Black, and start up minicom. See this excellent guide from elinux.org which explains which connectors are compatible and to which pins to hook them up.

Follow these instructions to set up minicom and connect to the serial command line of the Beaglebone. Once set up, insert the SD-Card into the Beaglebone Black and you should see an output similar to this:

Android is now booting, however, the surfaceflinger will crash, since it expects to find an opengl implementation which is not compiled yet. Also no data partition will be found nor mounted. This needs to be corrected. While for a professional setup, these files and changes should always be incorporated in the specific BoardConfig.mk and mini_common.mk .

In order to fix this problem, a couple of files and binaries are necessary.

Next, download the fstab.bbb and init.bbb.rc and copy them to the root folder (also adjust modes).

Plug your SD-Card back into the Beaglebone Black and hit the reset button.

Android will now boot and you should be able to get visuals on your HDMI screen. Congratulations, you just booted an entirely vanilla master Android / Linux configuration.